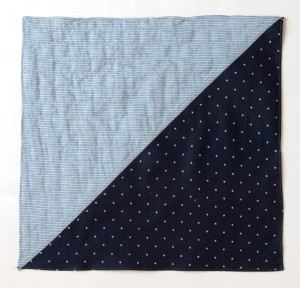 Here’s a little tid-bit about a holiday that celebrates a very famous patch-worked cloth:

“Oral tradition passed on through multiple generations holds that on June 14, Theodore Roosevelt was dining outside Philadelphia, when he noticed a man wiping his nose with what he thought was the American Flag. In outrage, Roosevelt picked up a small wooden rod and began to whip the man for “defacing the symbol of America.” After about five or six strong whacks, he noticed that the man was not wiping his nose with a flag, but with a blue handkerchief with white stars. Upon realization of this, he apologized to the man, but hit him once more for making him “riled up with national pride.”" -americanhistory.suite101.com/article.cfm/usa_flag_day_june_14

You can get your own blue handkerchief with white stars here on sale at 50% off! Just watch out for that bully commander-in-CHIEF!